The Fredericksburg Sister City Association, is dedicated to cultivating a special friendship and cultural exchange between the citizens of Fréjus, France, and those of the Fredericksburg area. In addition, FSCA contributes to international understanding by broadening the educational horizons of children and adults in the community through exchanges of ideas, information, and people.

Come join the fun as FSCA hosts the annual Mardi Gras fund raiser celebration. This event limited to FSCA members and one guest per adult member.

(Optional, but appreciated: feel free to bring an hors d’oeuvre or finger food dessert to serve 4 to 6 people)

Tickets: due to limited space, only 40 tickets will be made available for this event.

An ideal spot for a history vacation, Fredericksburg (pop. 28,000) sits on the falls of the Rappahannock River, and is located 45 miles (72 km) south of Washington, D.C. and 58 miles (93 km) north of Richmond. The city’s large downtown historic district is dotted with Colonial structures and reminders of those who lived and worked here, and is growing into a engaging destination of its own, with a burgeoning foodie movement and a well-beyond-burgeoning arts and music scene.

Historic Fredericksburg thrived early as an inland frontier port, where river traffic and tobacco trade grew along with the town’s importance. Close to George Washington’s boyhood home and a safe distance from the Colonial government in Williamsburg, Fredericksburg contributed heavily to the American cause during the Revolutionary War. Munitions were manufactured here, five generals left their families here to fight and Fredericksburg fortunes were devoted to the cause. In 1777, Thomas Jefferson and others met here to draft the Virginia Statute for Religious Freedom, laying groundwork for key aspects of the U.S. Bill of Rights. Many buildings of the era still line the streets of Fredericksburg. 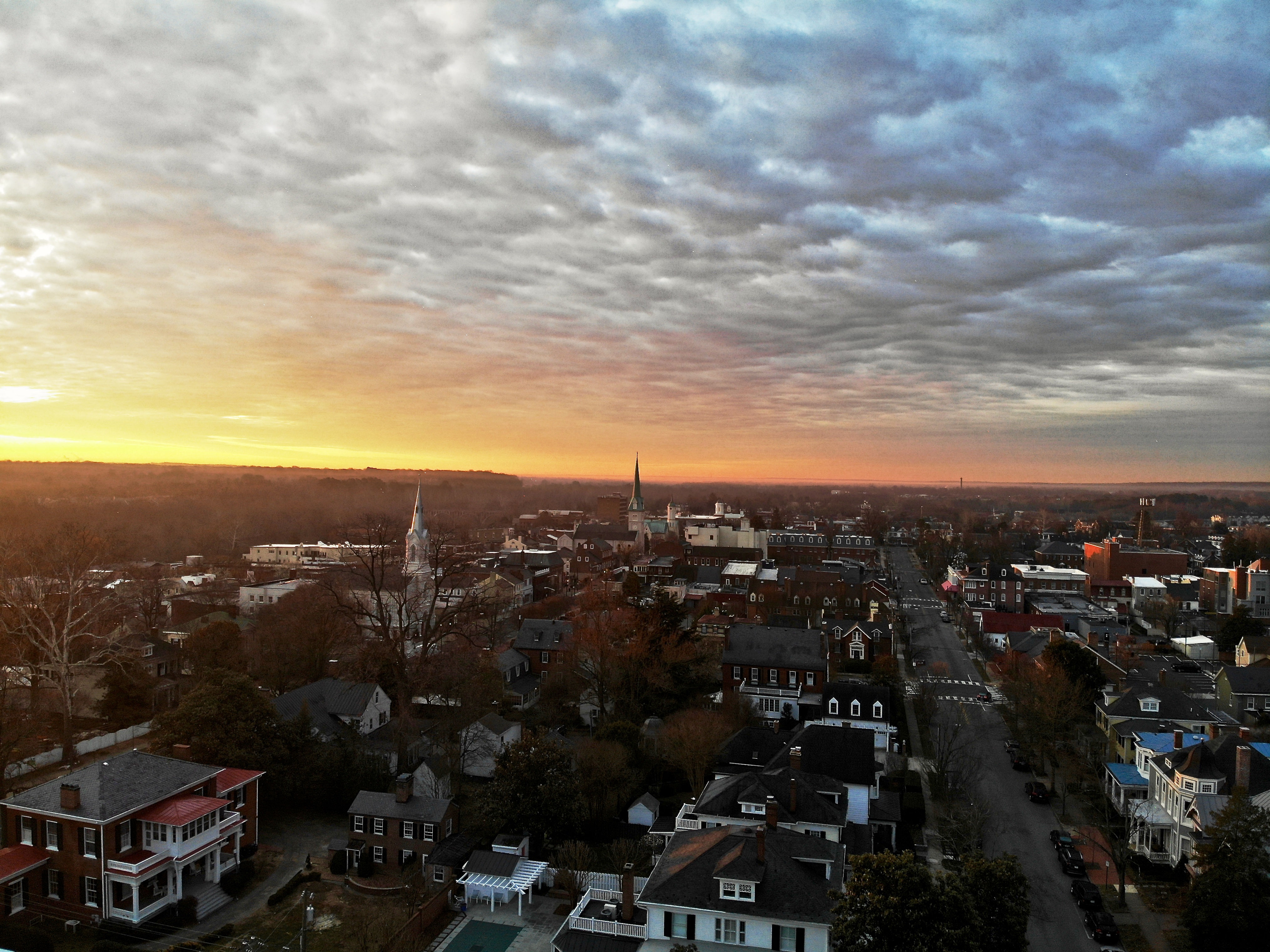 During the Civil war, Fredericksburg was battered bloody for three years. The city was crippled by a Federal offensive in December 1862. Confederate troops defending the heights above the city were able to hold off repeated Union attacks mounted from the shell-pocked remains of the business district. The armies were back in the spring of 1863. This time, most of the fighting raged outside the city at the country crossroads of Chancellorsville. Again, in 1864, the blue and the gray clashed nearby. Ulysses S. Grant had begun the last major campaign in the East in the tangled Wilderness. Ignoring massive losses, he soon had punched through to Spotsylvania. In each campaign, both armies left many dead and wounded behind.

Fréjus (pop. 53,000) lies on the Mediterranean between Nice and St. Tropez. A popular destination for summer tourists, the city has sandy beaches for swimmers and boarders, and several marinas. At the heart of the city, a medieval cathedral and ancient stone structures echo Fréjus’ historic past, now adapted to house boutiques, artist ateliers, restaurants, official City offices, as well as businesses and professional bureaus. 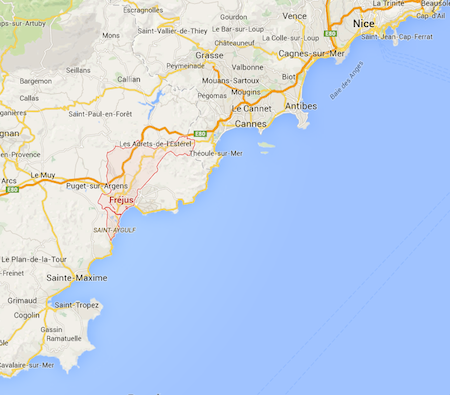 Founded as a Roman port city, Fréjus headquartered Roman naval operations. Named Forum Julii (Julius Market), it was linked to the Roman Empire by the Adrian Way, a Roman road that led from Italy to Spain. After the fall of Rome, the harbor eventually silted up, and the later medieval town was constructed atop a hill. Numerous invasions have assaulted the city, from Muslims to pirates. Napoleon landed at Fréjus after his Egyptian campaign. In August 1944 Fréjus saw the debarkment of Allied Troops, and a monument honors these landings.

Notable historic sites include the Cathedral, the Roman Amphitheater, the Roman city gate, and the remains of a Roman aqueduct. Fréjus carefully preserves its past and also celebrates its present, hosting several annual fetes including a pottery festival and a well-known mountain cycling competition, Roc Azure.

Numerous restaurants, a Provencal flair, and an active civic life add to the seaside city’s ambience. The Sister City partnership between Fredericksburg and Fréjus was begun in 1980. Over 35 years, Fréjus and Fredericksburg have hosted thousands of exchanges, both for students and adults. 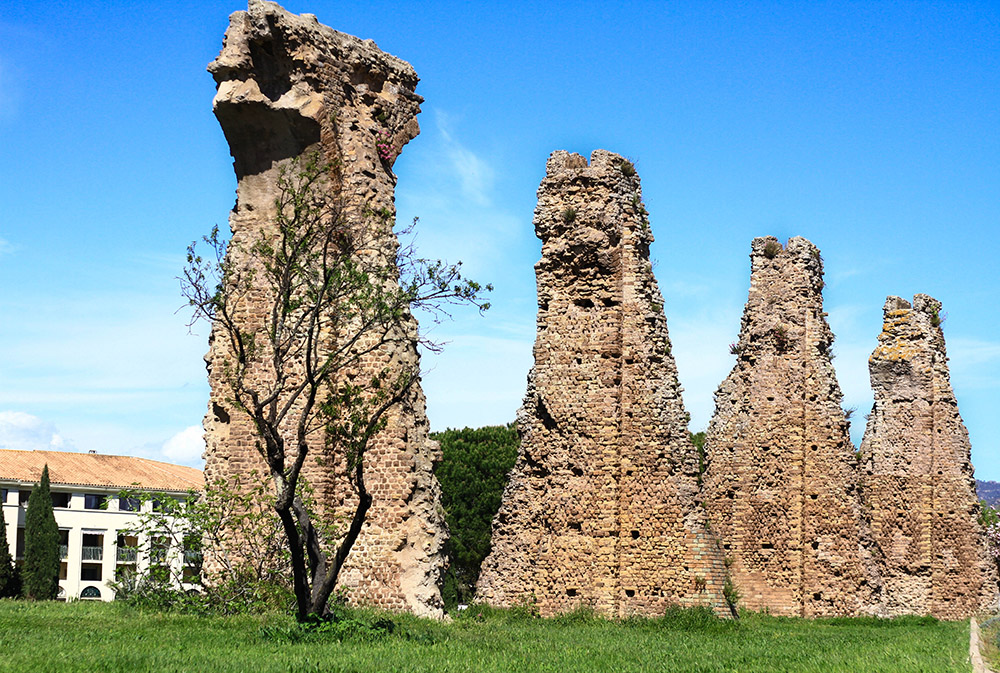 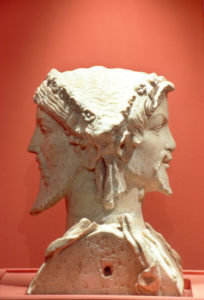 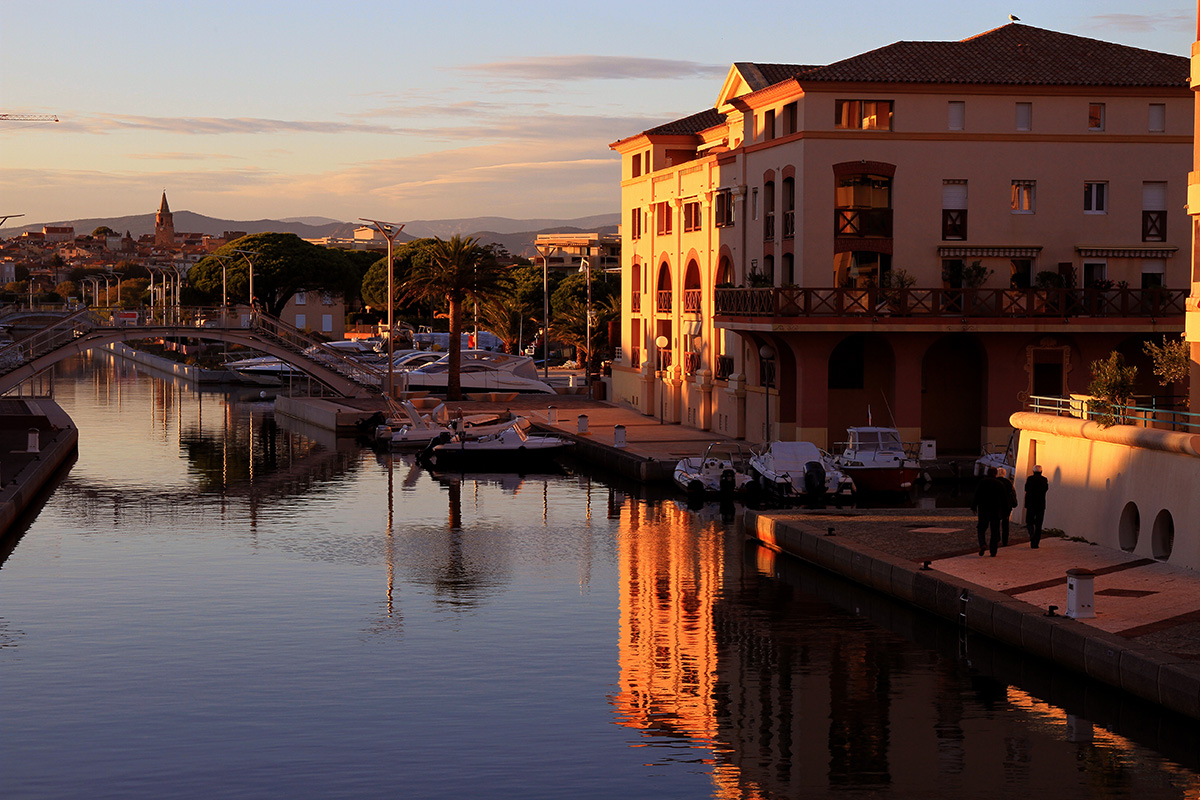 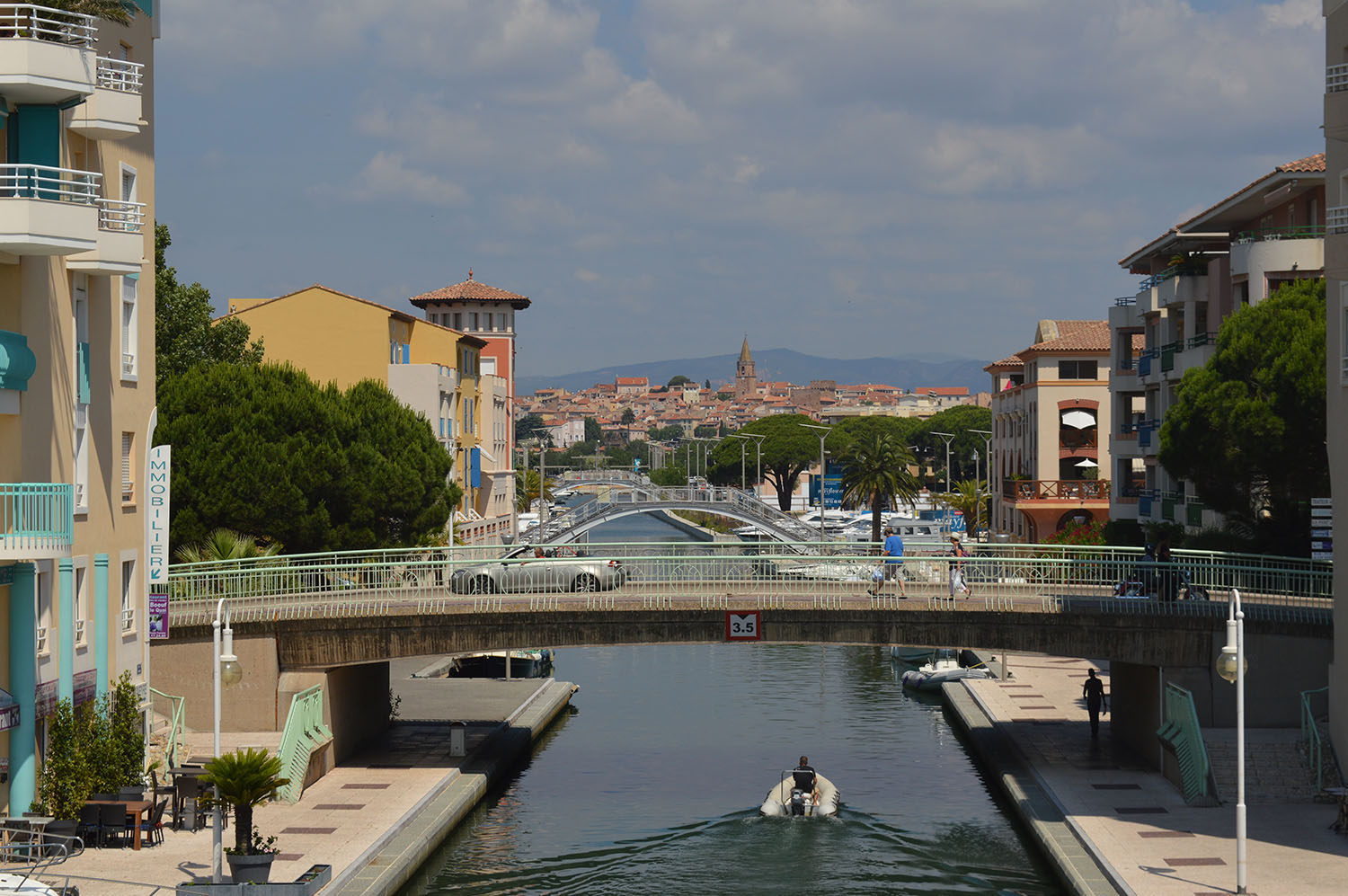 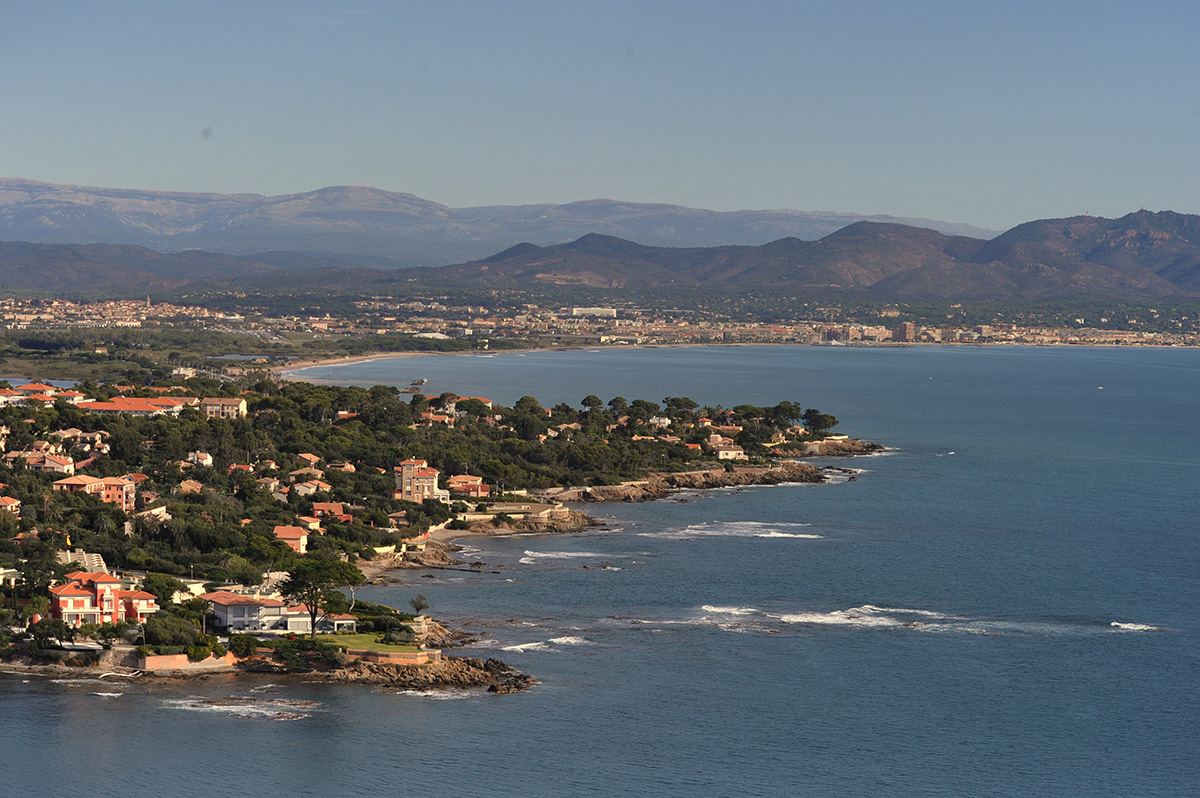 Since 1980, the Fredericksburg Sister City Association has participated in a student exchange with our Sister City, Fréjus, France. Fréjus, located on the French Riviera between St. Tropez and Nice, is a small town similar to Fredericksburg. Every two years students from Fréjus come here for 2 weeks. On the alternate years our students go to Fréjus. In 2022 the French students will be visiting us.

The host family is responsible for providing the student a “typical” American home atmosphere, sharing in responsibilities as well as leisure activities. Activities would be of your choosing and within your normal budget. The Sister City Association will also host several events and the hosting student is welcome [and expected] to participate in these events. Examples of some activities where most expenses are paid by our organization are: Walking tour of historic Fredericksburg, bus trips to D.C., Kings Dominion, bus trips to other events, pool parties, picnics, attending sports events, and more. There are some events where the entire family is included – welcome & farewell receptions. We plan as many events as possible, within our budget, to assure our guests can learn about our culture and the history of our area.

The following year, American students will visit Fréjus and those who hosted the previous year will have the first option of being part of the exchange, to visit Paris and stay with a French family in Fréjus for 2 weeks.